For we wrestled not against flesh 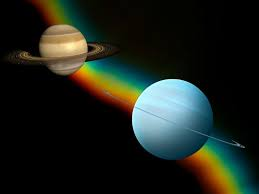 Last year wasn’t normal, it was very bizarre.  At the end of last year was the Saturn-Jupiter conjunction on 21st December.  Saturn was to usher in a wake-up call for many, bringing a lot of truth that a lot of people are not prepared for. Saturn will bring karmic lessons to many who are due for them and to those people, harsh realities that they do not want to be confronted with. That would be for the perpetrators of the evil that our earth is purging herself of. Jupiter's influence on that date at the end of last year rewards us with the sweet abundance we have earned. Astrologers said the first two months of 2021 were going to be chaotic, putting people on edge, and we’d be surprised. Around 21st January 2021, Aquarius season, Mars (martial, god of action, military!) was conjunct with Uranus, the ruler of quirkiness which is about surprises, the bolt from the blue.  This is the year of dramatic surprises. What took place with that fake inauguration in America is just one and we are going to see many more coming in the mix - Uranus is still being activated.  The GameStop thing took place on the last Full Moon in Leo. The astrology for February is mighty powerful. We have Saturn square Uranus and seven planets in Aquarius as well as a New Moon in Aquarius. Aquarius is about humanity, about the collective, about seeing the bigger picture. It’s about technology and inventions.  It’s about coming together.  The favourable time for this to happen is in the period of highly volatile energy from 11th February with the New Moon up until 25th February. There could be sudden revelations that will surprise some and others it will ruffle their feathers, especially having to do with governments, because Saturn is involved. Saturn represents governments and restrictions and he makes his first pass at Uranus.  Uranus is the ruler of all of these heavenly bodies and he rules Aquarius. Aquarius is very much a visionary, tapping into a higher realm of consciousness within yourself. Watch for (1) major declass and information drops regarding government, and (2) something to do with the financial system. February ushers in a process of smashing the collective belief system and beliefs surrounding financial and governmental systems because Uranus energy plus seven planets and a New Moon is about sudden awareness, so pay attention to sudden insights out of nowhere.  There is no way around this, a purging has to take place.  We are talking about a higher bodily vibrational frequency that we are not used to.  In the last few weeks measurement charts for the earth’s Schumann Resonance have gone completely red, showing the amplitude has gone up to 6,000 hertz!   Learn to go along with it and be in the Now. Your thoughts are creating your reality and you get what you expect!  If you focus on what you don’t want that’s what you get. Focus on the world that you want to build then that is what you’ll bring down. Stay in your high vibration, don’t dip down and get wrapped up in the little dramas of men. Turn the television off, you’re not getting real information there, and it’s getting harder to find real information on the internet also as your sources of accurate information are being suppressed by the Big Tech companies which are in bed with mainstream media and the cabal.  If you have been following any of the military intelligence posts online and see how they thread together and know the truth, that’s when you will stick to your convictions. Those of us who know the bigger picture know there is something much bigger to this whole spectacle that’s going on here.   The good guys in the military were on a mission going around the world to find people on the internet who would help them to awaken humanity.  It’s a bunch of people that are popping up everywhere and when they knock one down, another one pops up, that way the information can’t be stopped from spreading, that’s why we are here, because they couldn’t trust the mainstream media, the big businesses and the politicians; they had to rely on alternative sources of light warriors in alternative outlets to get the information out, this is the only way it has to happen. And there is only so much they can give out and that we can say on air.  Have faith!  We are going through a massive transformation right now, psychologically and physically.  The FBI have declassified some documents with important information on TESLA that will start to be disclosed.   IF there is news of an alien invasion it will be fake.  Stay away from all of this alien stuff and know that there is only a weird agenda behind this alien invasion thing.  Right now it’s a transitional process forcing millions around the world to see reality for what it is.  We have been following along, buying houses, buying cars, and now the whole system is teetering on collapsing because it’s all been built on lies and manipulation.  This is why the truth is coming out on the corruption that’s been going on for millennia - the truth is a higher vibration! The dark ones and the lower entities can’t take that.  Fact checkers never existed until the truth started to surface, right?  We need to connect with those who are on the same vibrational level and you will find them, whether it’s animals, friends, family, doesn’t matter.  Forget about whether the stupid virus hoax is going to go away or whether they’re going to reduce the restrictions.  Keep the vibrational level high and do things to keep your spirit alive and happy.